It’s nice when certain video games surprise you. It was the same for Skyrim. I’d never played an Elder Scrolls game before, until one fateful Christmas gift encounter. 200 hours […]

It’s nice when certain video games surprise you. It was the same for Skyrim. I’d never played an Elder Scrolls game before, until one fateful Christmas gift encounter. 200 hours later I was facing up to a very unpleasant dragon in the campaign finale. I loved it. Sea of Thieves is another title that has surprised me. I always thought it would be fun but I just wasn’t prepared for how much fun it would be.

Though the information on the full game is currently a little sketchy, what I have seen and played is a good indication of a truly hilarious and entertaining title, best enjoyed with friends, and probably alcohol — both digital ale and the real deal. The 15 minute sessions that I played at Gamescom showcased an enjoyable yomp around the ‘seven seas’, fighting opposing ships.

Is essence, for those unaware, Sea of Thieves put you and four of your friends on a ship. Equipped with nothing more than a few cannons, sails and the occasional rum, you have to roam the ocean looking for plunder, and enemies to plunder from.

The demo featured three ships of players in total, each with a crew of five. You can opt to steer the ship via the wheel, man the sails to capitalise on the direction of the wind, man the crows nest, ready a cannon, drink rum, or simply walk the deck, enjoying the view. Teamwork is essential for success, as is using the sails to gain speed. Do it wrong and you’ll find yourself stranded in the middle of the sea, leaving yourself wide open to attack.

If you all muck in, so to speak, you’ll very quickly benefit. In this game teamwork often results in victory. The game also allows for tactics, much like the real thing, though it seems you can’t task several Royal Marine snipers to man the crows nest to take out the opposing crew. All the combat, it seems, stems from hurling cannon balls at your enemy with the aim of sinking the ship. In response, crews can try to repair holes so you stop taking on additional water, keeping you afloat. But it’s all about balance.

The guy on the wheel can’t actually see where he/she is going because their view is obscured by the sails. You are only able to man a single cannon, which means splitting fire on the port and starboard cannons should you find yourself in the middle of two opposing ships.

Working as a team, as I’ve already stated, is one of the best ways to achieve victory. But what makes the game more enjoyable is the ability to get drunk. Down a few alcoholic beverages and you’ll find walking in a straight line very difficult. So the best thing is to gather your crew and then all of you get drunk and then try to make your way to the ship with hilarious results.

Sea of Thieves also allows you to avoid combat if you wish. It’s unclear if this option will be limited to the simple act of sailing in the other direction as fast as you can, but any encounters are bound to be interesting if there are additional communication features in-game. You can also search for treasure and encounter mythical creatures. Just be sure you don’t get too close. 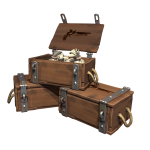 Sea of Thieves is due for release in 2017 for Xbox One and Windows 10.