Rise of the Tomb Raider – Lara’s Next Step

Rise of the Tomb Raider is the direct sequel to the 2013 release, and sees the evolving character of Lara Croft venture into another dangerous, and vertigo-inducing landscape of wildlife, […]

Rise of the Tomb Raider is the direct sequel to the 2013 release, and sees the evolving character of Lara Croft venture into another dangerous, and vertigo-inducing landscape of wildlife, extreme weather and supernatural events.

As third-person adventure games go, Tomb Raider has always excelled at providing hours of entertainment. The 2013 remake of the franchise and the character really changed things around, providing us with a significantly more vulnerable protagonist who doesn’t simply cruise through levels, blazing away with a pair of Desert Eagle hand cannons. It was a superb reinvention of the character, and took us to some truly breath-taking locations. But it wasn’t just about locations. The tombs were also back, as were the puzzles, though there was a greater emphasis on exploration than there was with solving puzzles in the 2013 Tomb Raider release.

Lara does actually partake in some archeology this time round

In Rise of the Tomb Raider, the story picks up a year after the events of the previous game. Lara is still coming to terms with the events on Yamatai and looks into her father’s research in order to provide some answers, and perhaps a purpose to her archaeological outings. Reassuringly, the visuals are sublime. The Environments, which range from snowy mountaintops to desert canyons to the tree-lined wilderness of Siberia are presented in wonderful detail. Everything seems vast in comparison to the previous game and there’s more to do this time round as well.

The wildlife is more of a challenge, with a plentiful supply of wolves and the occasional bear. That’s right, the bear is back, and it’s not easy to take down. And the way these predators are presented ranges from open terrain to cramped, cold, and dark caves where having quick reactions and superb eyesight is key.

The puzzles are back, and there are more of them this time. Some are fairly basic, while others force you to engage more brain cells than usual. In addition to the resurgent use of puzzles is the increase in tombs that you can raid for ancient riches. Okay, not always riches, as such. But each one is an entertaining venture with its own range of hazards and rewards. And Lara is now a swimmer. Providing some additional versatility.

The Compound Bow – obtained after much raiding.

As with the previous Tomb raider game you can craft various items, such as upgrading weapons and tools so they’re more effective. Firearms can be upgraded so they have a higher rate of fire, are more stable, or can hold more ammunition. The same goes for the trusty bow, though there’s more to choose from once you have collected all the necessary parts, and you now have more arrow varieties as well. You can also collect money and exchange it via a dedicated vender in-game for better equipment, apparel, or weapons. But thankfully these items merely provide additional choice instead of turning you into a grossly overpowered, bullet-spewing toff. And you can also progress your language skills by translating various scripts and tombs throughout the game.

On a personal level, it was the little details that added to my experience. Gaining additional apparel infers various bonus effects on Lara’s abilities. And it was also fun switching from a more suitable winter jacket to something involving a simple t-shirt and a couple of pouches, and watching her shiver and her teeth chatter due to the extreme cold of Siberia. It certainly made her a more realistic character.

You also have the choice of returning to previous areas within the game, much like before. Though the reason for doing so this time isn’t out of simple curiosity, it’s also down to the availability of weapons and equipment later on in the game. Can’t cross an area of a mission because you don’t have the rope arrow? Simple, take a detour and come back when you have it. This means there are still areas to discover, and items to uncover.

More importantly, though, Both Tomb Raider games of late have been highly successful in developing one aspect that I haven’t experienced at all in other games: vertigo. When Lara climbed the radio mast in the previous game and her all too frequent outings onto somewhat unfavourable clifftops, ridiculously high-zip lines or creaking rooftops, I’m always struck by just how high up she seems. Which ultimately forces me to respond with: ‘Nope! No chance of me climbing that’. Inevitably, I always do. It’s a wonderful mix of phobia inducing environments, ranging from darkened caves, water-filled chambers, and claustrophobic passageways.

But despite the hard work that’s gone into her appearance and mannerisms and the look of the environment around Lara, the story isn’t quite up to par. Though written by Rhianna Pratchett I found the direction of the plot to be somewhat lacking. Lara is again hit with a fusillade of environmental and situational hurdles that she has to overcome, much like the first, though this iteration seems to be re-treading old ground in terms of developing her character. The long term plan may be for her to develop even more over several games before she turns into the gun-toting explorer of old. And there may be an emphasis on reintroducing Lara to newcomers of the game. But for those who know the current series it does seem to be somewhat superfluous in terms of character development. Lara seems to revert to her previous gasping self all too often. I would like to see more of a mean streak in there, and there were times when she seems to be on the edge of becoming that, but then shies away.

Of course, the player is more than capable of turning her into a ruthless assassin, leaping down from trees or using zip-lines to surprise the enemy, but this is entirely down to the player and not the cut scenes in the game. Generally, though, the plot is good and the resultant dialogue an interesting element of the game.

Sensibly, there’s no multiplayer this time round. The previous game took what was good in single player and then tried to adapt it for multiplayer. That didn’t really work. The stealth element was no longer a factor and players couldn’t shoot as quickly or as accurately as they had in the single player campaign. It was almost like playing a completely different game. This time, though, single player takes precedence. And for a game like Rise of the Tomb Raider it’s the best choice. 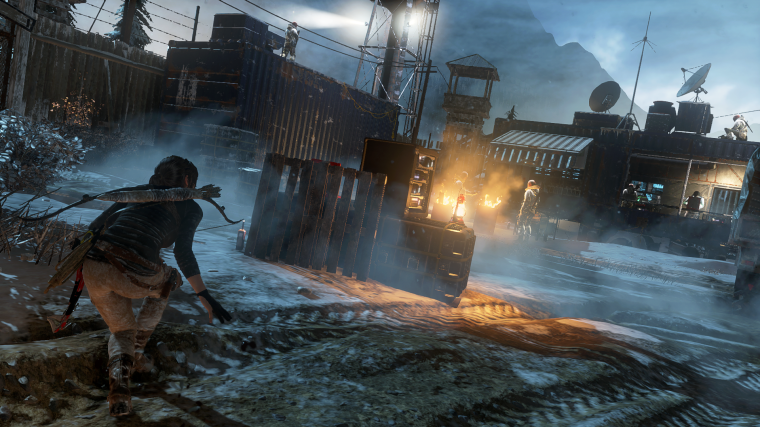 Lara sets off to disable the guards’ pay-per-view channels.

If multiplayer was to reappear at some point I’d prefer one-on-one games, where stalking is an important factor: footprints stay in the snow when tracking, using a stream confuses trackers, and you can set traps and ambush opponents. Or a game type where several players group together to take down a number of varied predators as they venture from one location to another. Tomb Raider needs to be completely different in the multiplayer field to the likes of Call of Duty, Gears of War, and Halo.

Overall, though, Rise of the Tomb Raider is a deserved follow up to the 2013 release. It has improved upon successful elements and has been wise to avoid going ‘all in’ for the sequel. It is progression at its best, but showcases enough new elements to make it a fresh experience.